What are the aurora? What causes them? What do we know about the aurora? Can we see any from the UK? This page will give you some background information about aurorae and how they are formed.

The sun at the centre of our solar system gives out a huge amount of heat and light, which makes our planet warm enough to live on. But the sun also throws particles into space. The outermost layer of the sun, called the corona, is continuously expanding away into space. This material is very hot, so hot in fact that atoms break up into charged particles called ions and electrons. A collection of isolated particles like this is called a plasma. Because the plasma expands out from the sun and past the planets, it is known as the Solar Wind. The solar wind also contains a magnetic field, called the Interplanetary Magnetic Field or IMF. The charged particles in the solar wind are tied to the magnetic field and both are carried along by the solar wind.

The earth is surrounded by an atmosphere of gases, which help to keep the planet warm and allow life to exist on the surface. Some parts of the atmosphere, such as the ozone layer, block the harmful ultraviolet light from the sun. The earth also has an internal magnetic field, which is just like a huge bar magnet. The magnetic field lines stretch from one pole, way out past the atmosphere and into space, then back in to the other pole. The north and south magnetic poles are fairly close to the geographic poles. The space around the earth which has the magnetic fields running through it is known as the magnetosphere. The magnetosphere is also filled with a plasma of charged particles. 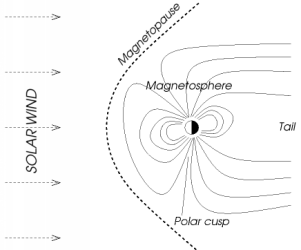 Diagram showing the magnetosphere of the earth, and the effect of the solar wind.

The solar wind pushes steadily against the magnetosphere, however the surface of the sun is a very turbulent and changable place, which can cause rapid changes in the solar wind. These changes in the solar wind disturb the magnetosphere and can cause both the injection of energetic particles into near-earth space, and the generation of huge atmospheric currents amounting to millions of amps. For example, in coronal holes near the equator of the sun, fast-flowing material spills out from the sun. If the hole is pointing towards the earth, then we will see the effect a bit like a gust of wind. A second, and more dramatic event is a coronal mass ejection or CME. Complex magnetic fields on the surface of the sun can erupt and send a large, fast-moving mass of plasma out from the sun and into space. CMEs typically contain billions of tons of material and travel at around 2 million miles per hour! If the earth happens to be in the way, then the magnetosphere will feel the effect as the CME runs into it. Following the arrival of a CME, a disturbance in space called a geomagnetic storm can be triggered. These geomagnetic storms cause intense auroral displays which are sometimes visible from the UK. 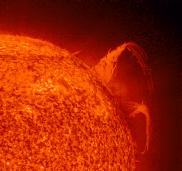 SOHO image of prominences on the surface of the sun. Erupting prominences can cause CMEs.

Although most of the plasma of the solar wind is diverted around the magnetosphere, geomagnetic storms can produce energetic particles inside the magnetosphere. When the particles reach the top of the atmosphere, they soon run into one of the molecules in the air. The collision stops the incoming particle and makes the air molecule light up. (The same system is used on a much smaller scale in a TV set - a beam of electrons from the back of the tube hits phosphor on the inside of the screen and makes it light up.) The light given off in the top of the atmosphere is visible from the ground if it is dark enough - the lights are known as the aurora borealis (northern lights) in the northern hemisphere, and the aurora australis in the southern hemisphere.

When the solar wind is quiet and the magnetosphere is undisturbed, the aurora only occurs near the poles. Many people assume that you have to be near the pole to see an aurora. But when the solar wind and the magnetosphere are disturbed, the aurora can expand, brighten and move towards lower latitudes. (The ring around the pole where an aurora may occur is called the auroral oval.) Disruption from a coronal hole may cause the auroral oval to expand over the north of Europe. But a big CME can expand the auroral oval over the entire UK, and even further towards the equator! These very rare events give the best chance of seeing an aurora over southern England.

So what does an aurora look like? In general, you will see large areas of colour, probably green or red, in the direction due north. For a weak aurora, the colour will be very faint and spread out, and will be invisible if there is light from the moon or from street lights. If the aurora intensifies, it may move higher in the sky, and develop into a more distinct arc. Brighter patches can develop which turn into rays, curtains or ribbons of light which quickly move around in the sky. As the light gets brighter you may see different colours at different heights. The best display comes when the aurora moves directly overhead, when you can see the corona effect where bands of light diverge from the sky directly above you, filling the whole sky.

You need a certain amount of luck to see a bright aurora, as individual displays may only last a few minutes. The display will often repeat many times during a night, so it is worth waiting after an aurora has gone quiet. Also, very big storms will run for a couple of days, so checking the night after a display may produce results. The best time of night to look is in the few hours either side of midnight, when the skies are darkest and the auroral oval goes the furthest south.

It is not possible to accurately forecast when an aurora will be visible from a particular location. But we can look for signs of the events which produce the aurora, and we can measure the disruption to the magnetosphere when it happens. Below is a summary of what happens before and during an aurora, with links to our live data explanation page.

The auroral display is fascinating to see, but there are also some important reasons for people to keep watch on geomagnetic storms. Satellites in orbit around the earth are vulnerable to damage if they are hit by the energetic particles produced by in a geomagnetic storm. The radiation in produced in a geomagnetic storm can also pose very serious risks to astronauts in space - spacecraft are built with shielding, but spacewalks must be avoided when geomagnetic activity is high.

The effects of a geomagnetic storm can be felt down on the surface of the earth as well. The atmospheric currents and magnetic fields produced in a big geomagnetic storm can cause huge electical currents to flow through metal objects, especially power lines and pipelines. During a geomagnetic storm in March 1989, currents in Canadian power lines in Quebec overloaded the entire grid, causing power cuts for millions of people. Currents in pipelines can cause them to corrode and break, and the disruption of the ionosphere causes problems for radio communication. Long-distance radio waves bounce off the ionosphere on their way around the world, however this is often impossible during a big storm.